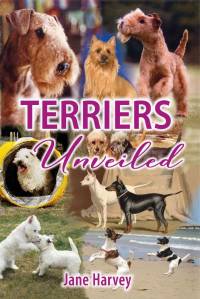 Terriers UnveiledAfter just 2 months, this popular book has sold 100 copies so is now in its second printing!!!

'Terriers Unveiled' takes a unique look at Terriers from their historical beginnings to their role in modern society. 35 modern and seven extinct Terrier breeds are described and illustrated with over 400 carefully selected photographs, appealing to anyone interested in Terriers.

Terrier terminology is explained is explained in simple terms using 32 original purpose-drawn graphics. General topics include hand stripping. living with Terriers and their use in modern society. Terriers stories, both fact and fiction, add to the breed information.

This book is 50,000 words and 380 pages long. It is written by Jane Harvey, a well-respected dog expert, author and judge. Over the last ten years, her widely acclaimed website, www.JaneDogs.com, was used as a platform to attract material from Terrier specialists. These contributions, now refined and peer reviewed, are presented in this contemporary book.

Copies of 'Terriers Unveiled' are available now. Initially, 100 copies were published and these have now all been sold! So the book is now in its second printing. The cost of each copy is $100 + $10 p&p within Australia. Direct Deposit may be made to Commonwealth Savings Bank: 063-236 1027 0274 in the name of Mrs Jane Harvey, accompanied by an E-mail to Jane@JaneDogs.com Please include with your postal address! For overseas orders, please contact us for a quote on the postage costs to your country.

'Terriers Unveiled' is a totally Australian hardcover book comprised of 380 individual pages. Each breed page contains a well researched history of each breed including references in the form of footnotes where applicable. All of the 400+ photographs and illustrations have attributions printed underneath them.

For simplicity of navigation, the book begins with an easily referenced Table of Contents followed by a wonderful Foreword by Vin McPhee, President of Dogs Victoria. A portion of this reads:

'The knowledge she imparts will no doubt make "Terriers Unveiled" her "magnum opus".

This is followed by a Table of Contents in 10 sections as follows: 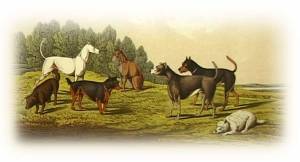 This 'General' section begins by describing my own lifetime with terriers and tells the story of the remarkable adaptability of one small Cairn Terrier, Jock. The section continues by discussing what to expect when committing to owning a terrier whose character and temperament are unique. The section then defines the pure breed, crossed and mixed breed dogs. 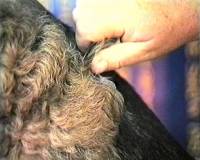 This section deals with grooming broken coated terriers. A 'broken coat' has a coarse outer layer of hair which, when plucked out, causes the growth of a new, coarse textured coat with a wave or break in it. The recommended method of plucking the old hair out is called 'hand stripping'. As this is fast becoming a dying art, it is my aim to demonstrate to future generations of broken coated terrier enthusiasts just how to do it.

3 How Terriers Used to Work 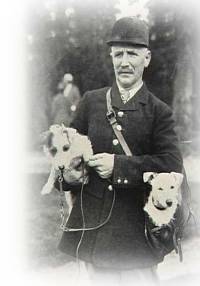 Between modern pesticides and the abolition of many traditional hunting practices, terrier work is now almost redundant. So, it is vital for those interested in breeding and/or judging modern terrier breeds to understand how and why their conformation has been developed depending on the prey the dog was required to hunt and the terrain in which it hunted. This section describes how and why the terriers' construction has been adapted into dogs with specialized digging skills 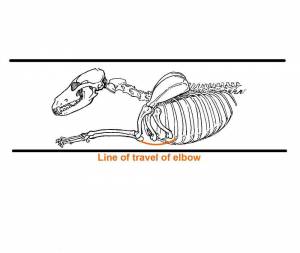 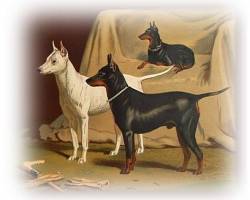 Today's Terrier breeds of England trace their origin back to the now extinct Old English White Terrier and the Old English Black and Tan Terrier that were common in England as early as the 1700s. These Terriers came in both smooth and rough coated varieties as well as in different sizes. By the 1800s Old English Terriers were either primarily white or black and tan as illustrated.

6 Terriers of the Border Region 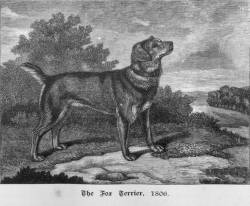 This wonderful woodcut dated half a century before the English Stud books began, was captioned Fox Terrier 1806. This was because the dog was used for fox hunting. The dog pictured is more likely to be a forerunner of the Border Terrier than its counterpart the Fox Terrier of England. From this early type of terrier originating in the border region between England and Scotland, this section follows the evolution of not only the Border and Lakeland Terriers, but also the Bedlington and Dandie Dinmont Terriers 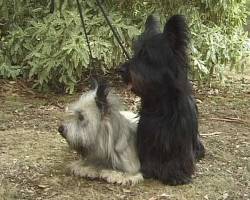 All Terriers of Scotland were historically called 'Scotch Terriers' until the advent of dog shows when they were called 'Scottish Terriers'. The word 'Scottish' is not to be confused with 'Scotch' which today more generally relates to 'things' such as Whisky and tweed! The word 'Scottish' is correct in both English and Scotch languages and is used when referring to dogs and people. From common original stock, the four different breeds of Scottish Terriers considered here emerged. This chapter explores how and why each developed their own special appearances and characteristics.

Dogs have been part of the Irish way of life since 600AD. As the centuries rolled by, the Irish breeds consisted of large Hounds used for hunting by the wealthy landowners, and Terriers for the general farm work of tenant farmers. Because these tenant farmers did not travel outside Ireland, during the 1800s four distinctively different breeds of Irish terriers developed independently of the rest of Great Britain 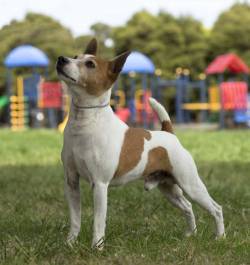 British terrier breeds were in the background of all the Terriers considered in this section. Some were carried on board sailing ships to kill the rats and mice that lived in the squalor of the ship's holds. Once the dogs reached their destination, they bore the name of their country of development. The two European Terriers considered here were deliberately developed to fill the specific hunting needs of their respective countries. 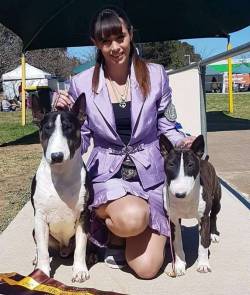 After dog fighting was banned in England in 1835, four Bull Terrier breeds gradually emerged. These were derived from old type Bulldogs with or without an admixture of the Old English White Terrier (smooth coat). The Bull Terrier, in a range of sizes was the first to appear the Inaugural English Stud Book. Half a century later, the Staffordshire Bull Terrier became recognized with American Staffordshire Terrier being the most recent.

A true masterpiece! What a pleasant surprise! Just what I need when starting judging the fascinating Terrier breeds. You deserve a big, massive THANK YOU!

Wow!  It's fabulous. Thanks so much for sharing your knowledge and terrier expertise with the dog world community.

A beautiful book to look at. An amazing collection of photos covering every terrier in Australia. The layout is easy to follow and informative at the same time. A credit to a lady who has dedicated most of her life to terriers.

The Terrier book contains so much information that will be new to many who think they already knew almost all they could about Terriers.

SO glad you have written the book, every terrier person should have a copy! Congratulations Jane, it is a must for everyone's shelf.

... love reading the history and having the comparisons of the breed standards.  The information will be a go to for my judging career.

... you have done a great job with the book and that it will be good for anyone who is interested terriers or dogs in general.

Just picked up my copy of Terriers Unveiled, love the cover, beautifully presented and lovely colour photos, the information included is great to read and also learning about other Terrier breeds and what they were bred for. Looking forward to reading it from cover to cover.

Book arrived safely... it is awesome cannot put it down.. it is AMAZING.

I love the cover- you look at  the book and know its something special. It should be a valuable learning tool for all dog people.

First glance is that it's amazing and a wealth of knowledge and information! So pleased that you got around to writing the book and publishing it, such an achievement, thank you.

The book looks wonderful. You have put together a wonder compendium about Terriers. The printers also did a great job, absolutely wonderful quality.

Jane Harvey's latest book Terriers Unveiled is a must have for any serious Terrier enthusiast, or judge, from trainees through to All Rounders. Compiled with a lifetime of Terrier experience this unique book really is 'all things Terrier'. Reading the history of the breeds I found it fascinating to learn exactly how each breed performed its original function. It is invaluable knowledge to take with you into a judging ring,

There is something for everyone in this easy-to-read book from things you can do with your Terrier, to stripping and presentation, detailed descriptions of how they performed their work, invaluable comparisons of the breeds and much more. Jane is to be congratulated on this magnificent work and I commend this book to anyone with an interest in Terriers, it will be an invaluable addition to your library.