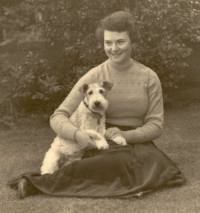 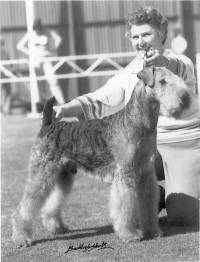 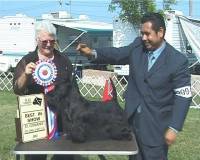 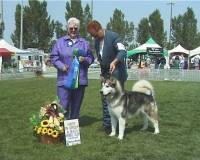 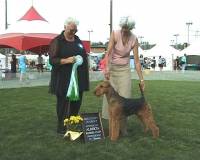 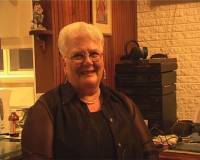 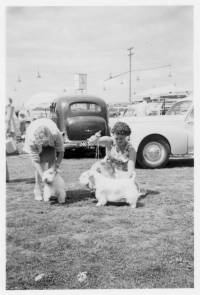 Jane Harvey (18) with her Sealyham Terrier 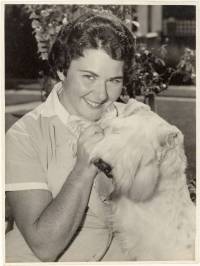 Jane Harvey (22) with her Sealyham Terrier

Jane Harvey has had a life-time passion for pure-bred dogs. She has bred 100 Champions, 84 Airedales over 14 generations straight and 17 Tenterfield Terrier titles including the breed's only Supreme Champion.

Jane is a widely published author and international judge. She is probably best known for her "Rangeaire" Airedales and her janedogs.com website. However most people who know Jane would equally credit her as an outstanding exhibitor, groomer, educator, producer and advocate for pure-breed dogs.

Jane Harvey has always had a love of dogs and as a child pestered her parents for a pet. At the age of 10 she was given her own Wire Fox Terrier and subsequently spent most of her weekends at dog shows. As a young handler, Jane won six consecutive Junior Showmanship titles at the Royal Melbourne Show (handling six different breeds), a record which still stands today. During the 1950s Jane became well known as a skilled exhibitor of both her own and other peoples dogs. She was also conspicuous because she used to travel to dog shows on a motor scooter with the dog in a box attached to the back! During the 1960s, even the marriage to husband Bob and the birth of their three children hardly interrupted Jane's continuous routine of exhibiting dogs almost every weekend! Jane's love of showing inspired her video/DVD How to Handle at a Dog Show as well as the six World Dog Shows and more than 200 speciality breed Dog Shows.

One of the keys to Jane's exhibiting success was her ability to breed quality dogs. In the early 1960s, Jane and husband Bob started breeding Airedale Terriers under the 'Rangeaire' prefix. In only 50 litters, they produced 80 Champions in fourteen generations straight, most likely another world record. The successful line-breeding program had a theoretical basis arising from Jane's studies of Veterinary Science at University. Jane's deep understanding of genetics, pedigrees and line-breeding led her to produce the video/DVD How to Make a Show Dog. The companion video/DVD How to Raise a Litter of Puppies explains the preparation, whelping, weaning and early training.

Another key to Jane's success as an exhibitor was her skilful ability to groom. From the age of 10, Jane learnt the art of stripping, grooming and blending of many breeds from a local expert, Mrs Agnus Davies. Those were the days before electric clippers, so Jane remembers well grooming Poodles with hand clippers and scissors! At the age of 14, Jane started her own terrier grooming business, in which she visited people's homes initially by pushbike and later by motor scooter bought with the proceeds of her enterprise.

In 1960, Jane travelled to Europe to gain further grooming experience. In London she worked at 'Town and Country Dogs' grooming salon (behind Harrods) and her many Terrier clients included Princess Margaret and her Sealyham. In Paris, Jane studied specialist blow wave and clippering technique at 'La Belle et sa Bete' (near the Arc de Triomphe) and received a grooming diploma in Canine Aesthetics from the owner, Monsieur Marcel, who is credited with creating the familiar modern day caniche en terrier or "lamb clip" for Poodles.

Because Jane felt so strongly about the importance of correct grooming, each new Airedale puppy owner was personally taught the art of stripping. When the owners lived remotely, Jane used to teach grooming via outlines drawn over photos, phone calls, letters and diagrams. This led to the production of the Video/DVD How to Groom an Airedale which today has become the premier reference on trimming broken coated Terriers and has been exported to over 50 countries.

Jane's expertise in dogs naturally led her to becoming a judge. She started judging over 50 years ago and now holds Australian National Kennel Council Championship Show licenses for the Terrier, Toy, Gundog (Sporting) Utility, and Non-Sporting Groups. Her judging activities have led here all over the world including New Zealand, Finland, Sweden, Germany, Zimbabwe, South Africa, UK, USA, Canada and every state in Australia.  The importance of the breed standard is emphasized in many of her videos/DVDs including Terriers Then and Now and "How to Judge a Cocker Spaniel".

In 1986, Jane and husband Bob founded Rangeaire Vision as an alternative to recording Jane's lifetime dedication to dogs in one or more books. Today Rangeaire Vision is a world leader in the specialist production of educational dog DVDs/videos with over 200 titles and exports to over 60 countries around the world. The Educational Series of dog videos/DVDs has received world wide acclaim and the technical quality of the productions have gained Rangeaire Vision corporate accreditation from the Australian Video Producers Association Inc.

The success of the videos/DVDs and Janes knowledge of dogs, lead Jane to become in great demand as a speaker, author and examiner. In Australia, she has lectured for the Trainee Judges' scheme and conducted Terrier Seminars all over Australia as well as Canada, South Africa and New Zealand.  Jane was formally a joint leader in the Terrier Group in Victoria's Judges' Training Scheme and is accredited to test trainee judges for their ability to hold Championship Show judging licenses which qualifies them to judge in any part of the world. Jane is also a regular contributor to Dog Magazines and newspapers and had a  weekly Radio programme 'The World of Dogs' on Radio 96.5 Inner FM in Melbourne.  Her love of Terriers inspired her most acclaimed video/DVD History of Terriers.

Probably Jane's most under-recognised personal achievement was her crusade to bring democratic elections to the dog world in Victoria.  Until 1991, the Kennel Control Council (KCC) was a dictatorial, all-male committee 'appointed' by the Royal Agricultural Society of Victoria. Membership was compulsory for any pure-bred dog owner, exhibitor, judge or breeder. At its peak, the KCC had over 25,000 members and an annual income of three million dollars. Acting as this suffragette and at considerable personal risk of being disqualified, Jane took the case to the Equal Opportunity Board as well leading legal and political individuals.  The campaign lasted three years and finally resulted in a new democratic constitution.

Jane was subsequently elected to the Management Committee Board of the Victorian Canine Association (VCA) and held that position for over 7 years. During this time, she was involved with many Committees including chairing one that dealt with legislative matters at all three levels of Government, deputy chairing Obedience and Agility, and chairing a committee that built up a library collection of over 7,000 literary works on dogs. Jane still provides advice and opinions to several Government advisory committees and works in the background advising on some of Victorian Canine Association's administrative matters.

For more information please see About Jane Harvey on JaneDogs.com.