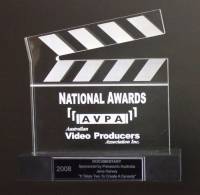 Rangeaire Vision is a world leader in the specialist production of dog DVDs/videos. Founded in 1986 by Bob and Jane Harvey, Rangeaire Vision has now received world acclaim. Bob and Jane have also gained Corporate Accreditation with what used to be Australian Video Producers Association Inc. We also received the award for Best Documentary 2008.

The beginning of 'Rangeaire Vision' grew out of Jane's remote teaching of people to groom.  For many years through the 1960s and 1970s, Jane used to help people living a long way away from her to trim Airedales by phone and letters containing photos on which she drew lines.

In the early 1980s, a person from Perth sent Jane a video showing himself trimming his Airedale, asking for advice. So, Bob borrowed a video camera and 'filmed' a reply. Basic as that was, it was added to firstly for an enquiry from Tasmania, then one from Queensland and so on. This video, together with the 'snow' between the various 'takes', sold many copies.

In 1984, Jane's son, Rick shot their first professionally organized video. So, How to Groom an Airedale was produced unedited, with each shot rehearsed and ad-libbed. This video has stood the test of time and, in an enhanced form and on DVD format, is still in great demand today.

Following on from the success of the grooming video, the next most asked about subject is breeding. This led to the filming of How to Raise a Litter of Puppies which was shot using professional tape and editing. This video, now converted to DVD has been re-edited many times over the years and remains one of Rangeaire Vision's biggest selling titles. 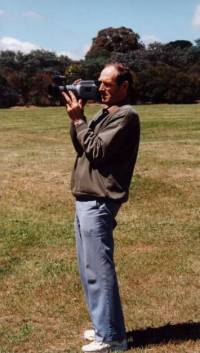 In the 1990s, husband Bob superseded son Rick as the principal cameraman and also the editing. Over the years, incorporating the latest equipment, the remainder of the educational DVDs/videos followed. Together, Jane and Bob form and outstanding team. Jane is highly knowledgeable, creative and handled all the commercial side. Bob is highly technical and also a valuable part of filming the vision and producing the original graphics for Rangeaire Vision productions.

From the mid-1980's until around 2005, they recorded many breed clubs. For these, Rangeaire Vision was in a unique position using their expertise in dog knowledge about dogs, they could ensure that the footage was what the a dog enthusiast wished to see. There were many specialist shows filmed during this period and indeed, bookings for Australia's most important dog events needed to be made up to two years ahead.

In 1995 Rangeaire Vision also sponsored the 'Encouragement Award' for new exhibitors/breeders of pure breed dogs where a DVD from the 'Educational Series' was given as a prize for winners at Open Shows with a Final conducted at the end of the year. Rangeaire Vision was also filmed the world dog shows in Bern Switzerland, Brussels, Vienna, Budapest, Helsinki, Milan Italy and Portugal.

At the 1998 International Contest of Veterinary Video run by the University of Zaragoza Spain, 'Rangeaire Vision' received a Diploma for participation in the 'Animal Production section for 'How to Raise a Litter of Puppies' and 'How to Make a Showdog' and also a Diploma in the section of Basic Sciences and Environment section of 'The History of Spaniels'. There were over 100 entries at this event.

In the early 2000s, as DVDs began to take over from VHS tapes, Rangeaire Vision moved to digital format and editing which enabled higher quality and more advanced editing. It also allowed the use of multiple cameras, which is important in the editing to give concurrent shots from multiple angles. The high quality results were made possible by the technical expertise of Bob who is adept in the field of dog videography, video production and editing.

Certainly the strength of Rangeaire Vision DVDs/videos lies in their specialized content. In 2020 a book was added to their repertoire with another book added in 2021. With today's abundance of videos, including YouTube and a camera in every mobile phone, in 2008 Jane and Bob started a parallel activity building a comprehensive website, JaneDogs.com as the primary means of publishing knowledge on dogs.

Since 2008, in place of producing more DVDs, Jane dedicated herself to putting her experience and knowledge of  dogs into a substantial website called JaneDogs.com. This unique site covers a full range of topics on dogs from their early history in art and literature to their role in modern society. It contains over 330 articles and more than 2,450 photographs, pictures and diagrams and continues to grow with the ultimate aim of covering all 180 major breeds of dogs including their history and comparisons.

Please visit JaneDogs.com and tell us what you think!